C.C. Wheeler’s Steamboats on the Choptank and Tuckahoe

Caleb Clark Wheeler was born in 1839 at Gilpin Point in Caroline County. At age 12 he began work as a cook on a sailing schooner that shipped goods and passengers between the Choptank and Baltimore. By age 18, he was a schooner captain, and at 21, he was part owner of the schooner John Nichols.

Wheeler could not read or write, but he had sharp business acumen. He opened a general store at Gilpin Point in 1862, at age 22, and served as middleman between Choptank River farmers and Baltimore merchants.  Wheeler moved his business from Gilpin Point to Hillsboro in about 1870.

After his move to Hillsboro, Wheeler began to specialize in shipping grain.  He had a 76-foot schooner, named the C.C. Wheeler, built at St. Michaels in 1872. He also purchased two or three second-hand sailing vessels, including the two-masted schooner Dexter built by Satterfield and Moore in Greensboro. Dexter was about 20 years old when he bought her in 1891.  He kept Dexter less than two years.

From Sail to Steam

In 1877, Wheeler purchased the wooden freight and passenger steamer Raleigh for use on the Baltimore to Choptank-Tuckahoe route. But Raleigh proved unsuitable for Wheeler’s primary enterprise of hauling grain, and he sold the vessel within a year. Wheeler replaced with Ruggles, a 124-foot screw steamer. By 1880, Ruggles was making two trips each week between Baltimore and Hillsboro.

Wheeler also chartered other steamboats, including Conoho, Hamilton, Meteor, and John E. Tygert, to carry produce to Baltimore during the busiest times of the harvest season.

Ruggles provided passenger service twice weekly between the Tuckahoe and Baltimore, leaving the city every Saturday and Wednesday at 7 p.m. and arriving at Hillsboro at 9 a.m. the next day. She remained overnight and returned Monday and Thursday at 10 a.m.

Minnie Wheeler  on the Tuckahoe

The steamer Minnie Wheeler was launched in Baltimore in May 1881. She was the vessel best remembered by Tuckahoe residents.

Below the main deck, staterooms, and pilot house, Minnie Wheeler could carry 5500 bushels of grain in her cargo hold. 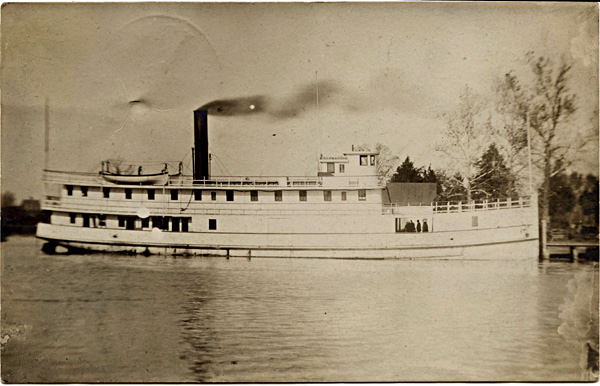 Luxury Steamers of the Wheeler Line

In 1884, Wheeler had the steamer Chesapeake built and added to the Wheeler Line. She was 132 feet in length, 24 feet in beam, and had a draft of 8 feet. At 316 tons, Chesapeake was larger than Minnie Wheeler, with a grain capacity of 7000 bushels, compared to Minnie Wheeler’s 5500 bushels.

With the addition of Chesapeake, Ruggles was sold. Chesapeake and Minnie Wheeler together served the Hillsboro-Baltimore route via the Choptank and Tuckahoe for the next 11 years.

Easton was added in 1886. She was considered to be one of the finest steamboats on the Bay at that time. Easton was the largest of the Wheeler steamers, measuring 154.8 feet in length and 30 feet in beam, with a 10 foot draft. She was 460 gross tons.

Wayman Wharf on the Tuckahoe

In the 1890s, Wheeler Lines ran steamers between Pier 5, Light Street, Baltimore, and wharves along the Choptank and Tuckahoe six days a week. Wheeler owned the landing at Coward’s Point on the Tuckahoe, and the wharf and granary at Kingston Landing on the lower Choptank.

Like other steamboat companies, Wheeler leased landings at his two terminal points — Baltimore and Wayman Wharf, below Hillsboro — and some wharves in between. Office, warehouse, and pier in Baltimore cost Wheeler $5000 per year. Wayman wharf was leased for $40 per year from the Waymans, a prominent black family of Caroline County. (See the Bishop A.W. Wayman Pilgrimage.)

Headquarters of the Wheeler Line was a small office in a granary on Hillsboro Wharf, furnished with two small desks and a safe. Bags of grain from several Hillsboro granaries were loaded by chute onto scows or flat barges and poled downriver to Wayman Wharf. The barges each carried about 3000 bushels of grain.

Passengers and Hillsboro townspeople could also reach Wayman Wharf by means of the “Sailor’s Path”. The path got its name from the steamboat crew members who would walk between the wharf andthe town.

Between Baltimore and Wayman’s, Wheeler steamers stopped at these landings during the 1880s and 1890s:

The Fate of Minnie Wheeler and the Wheeler Line

Wheeler Transportation Line was a thriving enterprise when Captain C.C. Wheeler died prematurely of cancer in 1899. He was 59 years old.

Wheeler died without a will. By order of the court, Minnie Wheeler, Chesapeake, and Easton were sold to the rival B.C.& A. Railway Company in 1901, along with the lease rights for the various Wheeler Line wharves.

B.C.& A. soon sold Easton to a Michigan company. She was sold to foreign interests in 1917. B.C.& A. continued to operate Chesapeake on the Tuckahoe until 1916. Minnie Wheeler was used only for freight and as a relief boat. Both were sold in 1916 to Bethlehem Steel Company in Baltimore for use as workers’ quarters. Both vessels were scrapped soon after WWI.